The Best Addiction for Men: Kindness 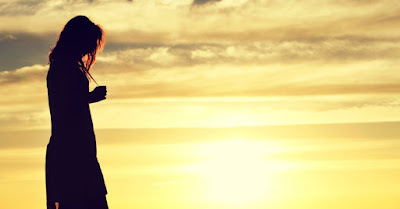 So it's 2018, and for all the strides humankind has made in science, inclusion, and respect toward one another, I feel at times, lost.
Lost in a series of random thoughts that slap my optimism hard, with ongoing displays of injustice or disgust.

- Sitting at an old auto repair shop next to an elderly customer, I peek toward the shop floor, and catch the 1989 Sunshine girl taped above one of the mechanic's toolboxes.

- Hanging by the bar in a downtown nightclub I catch two giddy young men suddenly grind up against a random woman, complete strangers in each other's eyes.

- News stories of men who hit and injure their girlfriends, as if to assume they are their property

Why does this still go on?

One day, I watched one of my favorite movies with a group of friends and acquaintances. The Last Samurai graced the screen with its timeless tale of a great 19th century battle between the Japanese military and the land's 500 year old Samurai peacekeepers. The story is one of my favorites because it is dotted with powerful signs of honor, humility, shame, and at its core, a deep responsibility for preserving the old tradition of peaceful human existence.

As mentioned, the basis or root of peaceful existence is respect. With respect and humility, we can place ourselves before others in a selfless manner. In this philosophy, we are open to listening, understanding, and helping one another. These actions help nurture a civilization with greatly cultivated opportunities to strengthen it through trust, optimism and compassion.

In particular, what has bothered me as of late, are the random indicators of an immature culture, particularly in young males (for the sake of today's article). There have been times where I've heard the traditionally commonplace whistle, careless insult, or outright lack of courtesy from young men towards women of all ages.

Now don't think I'm painting with a thick and dark brush here...I have met many people, both male and female, who grew up influenced to show an extraordinary level of respect and courtesy towards others. For those people, and those who taught them, I give my thanks.

But it is the few slow-growing number of men who are either not taught courtesy, or taught to act in a way other than courteous...that draw pessimism in me.

I believe that there are four major factors that influence, to some substantial degree, a person's habits and choices. They are: Media, Parents, School, and Peers. 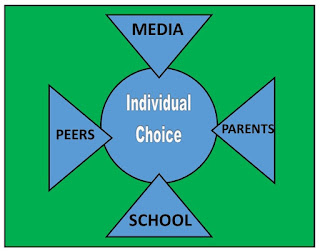 Each of these factors are able to yield positive and/or negative influences in a young person's life. Quite often, they can all continue to influence one's life to a point that they can have some effect on the person's personality, conduct and life choices.

Young kids and adults spend time with each of these four influences almost every day.
They are bombarded with commercial ads or suggestive music or graphic video games, all purposefully devised in the media realm, from social media apps to television programming.
When in school, or the workplace, people attempt to learn problem solving skills and routines so they can earn a rewarding career. During such shifts, they interact with cohorts who can influence them in either kind and inclusive, or subtle, possibly distasteful manners.
Peer groups, especially those of the age whom a person can relate to, can imprint a hugely suggestive influence on a person. The attitude and agenda of certain individuals and peer groups may communicate in a compassionate or aggressive dialogue, which sets the tone of activity within the peer group.
Parents are the traditional pillars of support for children, having been there from the start. Barring the odd parent with arguably selfish or bad habits, most parents operate on the premise of undying love for their children. At the end of the day, if a parent reminds his or her child to open the door for others, do their homework, or stay away from drugs, whether it be said calmly, or through a scolding voice, a parent educates his or her child because they love them and care for their eventual well-being.

Growing through and navigating this fast-paced, quickly-changing world is not easy for young men.
It is certainly also not easy for young women, who become the subject of the odd disrespectful act or discourtesy.
I feel like pointing the finger at the media and peers as two of the greatest entities which have the ability to influence a youngster, for better or for worse. Media is both subtle in its imagery, and able to morph quickly in its objectives. Through the availability of so much content of varying genres, people can locate virtually any food for their thought, be it realistic or not. And it is when youngsters are exposed to content that is ill-representative of decency, that some of them gorge on the fantastical until it quietly and subconsciously becomes a perceived reality in their still-developing minds.

Negatively influential peer groups can have the same effect, in fact, to a more powerful extent. Friends can use the skill of persuasion, rationale or argument to incite amoral or disrespectful views on someone. The debate can continue faster than at the media level, as a human can swiftly persuade a particular view or philosophy on another human.

It is all of these forms of influence which can, at any time, cascade into terrible addictions that have at their core, roots of disrespect, arrogance, intolerance, and greed. None of these elements are able to find clear paths to love and respect between humans.

If all this were for good, then the four methods of influence would be wonderful. But over time,and especially with the advantages of speed and technology, society sees a great and perhaps grotesque struggle between the sexes as they attempt to find heartfelt bonds in both friendship and love.

Virtually gone are traditional elements of courtesy, or displays of good listening skills, where a man and a woman can sit and communicate intently and without distraction. Fleeting, are the selfless actions that exude appreciation and admiration- the ones that come with no unusual conditions, hitches or surprise obligations in return. Gone is the one addiction that should be prevalent in all men in a responsible society...simple kindness.
Instead, society churns out a growing male populace of arrogance and aggression. Innocent learning is replaced with strategic charm. Instead of skillfully hand-painting a portrait of an admired woman as a show of courtship, females are met with cold textual introductions, laced with fabricated expectations and endless dick pics. A culture of objectification continues to drop its existence in random workplaces, casual social gatherings or even during a simple walk to work.

As I wince at these notions, I search deep down for optimism. Humankind did not come this far only to operate in reverse. If I were to conclude the best remedy for this disgusting problem, I would say that humanity needs re-education. Only with great effort in educating today's and tomorrow's generations will women feel more comfortable in the workplace, in school, in social gatherings and in relationships.
With all the garbage media programming and unacceptable habits floating around in every daily interaction, there has to be a reduction in commercially-driven concepts of fantasy and "liberalism-without-responsibility". After all, for a society to allow itself freedoms and opportunities that seem endless, there should be the attainment of a grounding mechanism, like pertinent responsibility, which cautions the decision-making of groups or individuals, and heeds humility as a mechanism for respect.

So as I reflect on humanity's less than mature and responsible behavior over the years, I accept the task of responsibility that a generation must have for the one that follows it. Humans (in particular, males) must prove a strong existence of the heart that beats deep in their chests, and live each day setting a strong example of the values that make women comfortable around them.
Undoubtedly, many men know it. But many do not, and must seek to grasp such existence.
Holding open a door. Issuing a thoughtful compliment. Being an understanding, supportive individual. Any of these actions can be examples of influence which, when demonstrated in media, schools and in peer groups, help convey a warm, inclusive and safe environment for everyone in a society. Constant dedication to these demonstrations of kindness, humility and respect can lead humans to embrace an addiction that radiates endless harmony.

And on a more personal note I offer an admission...
...For as long as I have known love and have loved, I will forever know that a woman lives through her heart. A woman's heart guides her first... and guides her always. She basks in happiness. She navigates through the turbulence of pain. She reflects on life's journeys. And she anticipates life's next bend in the road. All, through her heart.
Therefore it is up to man to gaze honorably into a woman's eyes- a mother, a sister, a spouse- and learn the intricacies of her heart. For it is through a woman's heart, that a man may find love in his own heart, and from it, kindness and humility will never fleet.