A sneak peek at my new release: Vigilant Hart 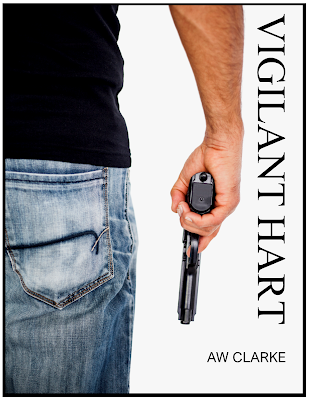 Hey everyone! I have a new book out!
It's my fourth story, and it's a little different from my other works.

I whipped up this novella over the summer and it is now available on Amazon, in both ebook and paperback formats.

I won't reveal too much about this action/mystery story, because if I do, I'll be revealing too much.
Vigilant Hart features a tall, blue-eyed, strong and silent Mitchell Hart. He has a strict mission that cannot falter. That is, until he crosses paths with an unintended influence. That influence will prove most challenging to his focus.
...and we will leave it at that!

Vigilant Hart was my new challenge...to try to write a successful, impactful story in a different genre.
I usually write contemporary romance, but this story was a step into the new and unfamiliar for me!

ARC copies have come back with positive vibes, and so I am now happy to release Vigilant Hart to readers! I hope you enjoy this story. And there is consideration, given I get enough feedback; to make this into a three book series. I may add a prequel and sequel to Vigilant Hart.

Well, enjoy the book, and please feel free to contact me with any feedback! Your words always make a difference in the literary world!
As a bonus, I've posted the Prologue for your reading pleasure. If you like it, pick up the book!


Turning about, he peered out the windscreen and verified his captive’s landing on the desolate beach below. He then eased back on the yoke and raised his speed, climbing into the distant orange glow of the evening sky.


Vigilant Hart wis on sale on Amazon.com and Amazon.ca, by AW Clarke. Contact me at awclarkenovels@gmail.com for more info.
- August 26, 2018